Kings Langley is a large village, situated in the Gade Valley and is of significant historical interest. 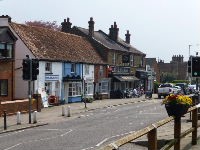 The village high street contains historic buildings and local shops, and the main part of the village has a community centre, four churches, three schools, four pubs, two large sporting clubs (Football & Cricket), and several other active societies and clubs, e.g. the History & Museum Society, the Scouts, and the Guides. 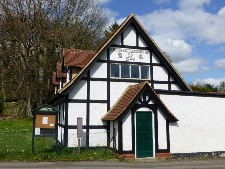 In the North of the Parish, there is a separate “mini-community” of Rucklers Lane, including the adjacent Abbots Rise & Shendish Estates, with its own Community Hall (pictured), built by the Longman family, and pub.

A little bit of geography…

The village is situated in the Gade valley, near the Chiltern hills, and in the main communications corridor between London and the North West of the country. 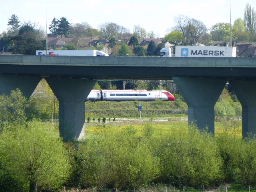 The Grand Union Canal and the West Coast mainline railway were built along the valley, the M1 motorway runs parallel a few miles to the East, and just to the South of the village, the Gade Valley Viaduct carries the M25 London Orbital motorway across the valley.

A little bit of history…

The name “Langley” derives from “Langelei”; a long meadow or clearing, which was purchased by Edward I’s wife, Queen Eleanor of Castile around 1276.

Edmund de Langley, the first Duke of York and fifth son of Edward III, was born in the Royal Palace (built under the supervision of Eleanor of Castile, wife of Edward I), in 1341. His tomb and that of his first wife Isabel of Castile is contained in the very attractive All Saints Church, which in turn is adjacent to the tranquil Village Garden. Edmund was the great grandfather of Edward IV and Richard III.

During the Black Death of 1349, the Royal Palace was used by Edward III as his seat of government. Sadly, the palace is no longer standing.

Until 1935, the village historically held an important royal prerogative, the right to fly the Royal Standard.

Today, the village has a population of almost 6,000. It has a thriving High Street with many and varied shops offering a wide range of goods and services.

The Grand Union canal, which reached the village in 1797, forms the border with Abbots Langley to the East.

The village has a library, community centre, primary and senior schools, two doctors’ surgeries and a retained fire station.

On the sports front, the village has an active bowls club and its cricket and football clubs have recently completed new modern facilities.

The village also has many community groups and societies and every June stages the annual carnival on its common. For many years until his death, Kings Langley was the home of renowned jazz musician and radio presenter Benny Green. And more recently, was the home of England and Watford football manager, Graham Taylor.

This website uses cookies to improve your experience while you navigate through the website. Out of these, the cookies that are categorized as necessary are stored on your browser as they are essential for the working of basic functionalities of the website. We also use third-party cookies that help us analyze and understand how you use this website. These cookies will be stored in your browser only with your consent. You also have the option to opt-out of these cookies. But opting out of some of these cookies may affect your browsing experience.
Necessary Always Enabled
Necessary cookies are absolutely essential for the website to function properly. This category only includes cookies that ensures basic functionalities and security features of the website. These cookies do not store any personal information.
Non-necessary
Any cookies that may not be particularly necessary for the website to function and is used specifically to collect user personal data via analytics, ads, other embedded contents are termed as non-necessary cookies. It is mandatory to procure user consent prior to running these cookies on your website.
SAVE & ACCEPT